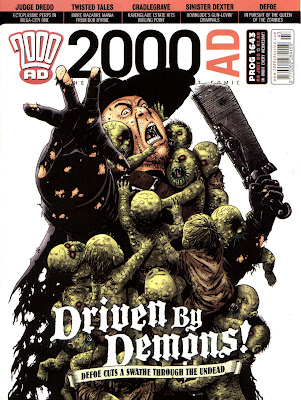 Hey guys,
Before I go away for the weekend, I wanted to post this "making of" feature for my next Defoe cover for Prog 1643 of 2000AD, which subscribers should be receiving in the morning, and it'll be out in stores from Wednesday.
Oooohhh, I've been looking forward to showing this cover....
Here's what happened: Before the writer of Defoe, Pat Mills, starts writing a "Book" of Defoe, he very kindly asks me for my input of things I'd like to possibly draw in the future, and he'd do his best to put it in if it worked. So a year or so ago, I mentioned a certain scene featuring zombie babies that I thought would be very cool (that scene actually features in this episode of Defoe, so I can't spoil it).
So, inspired by that scene, the idea for this cover just flashed into my head, and I was so certain would work, that I didn't even bother pitching my master and editor, Tharg, different ideas to choose from. I REALLY wanted to draw this idea: Just a simple image of Defoe clearly struggling as he is COVERED in zombie babies!
But even though I thought it could be a great image, I knew it was debatable that Tharg would go for it--after all, if you think of what zombie babies actually are, it's a bit close to the line and could be perceived as "bad taste"...
Anyway, the very crude rough drawing I pitched is below: 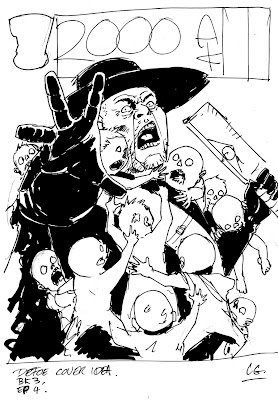 So thankfully Tharg liked what he saw, giving me the go ahead to carry on, but understandably voiced his concerns. These being what I predicted: that if the zombie babies looked too much like deceased babies, then obviously some stores may find it too offensive to stock, which is fair enough. It's ok to have zombie babies in the interior story, but it's probably not a good idea to have them on display on shelves in mainstreet stores.
Below is the photo reference I used of myself posing as Defoe, followed by the pencilled cover. 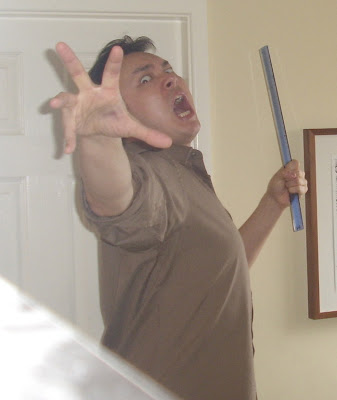 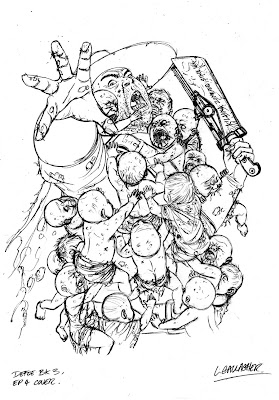 Here's the pencil version I sent for approval. I basically just drew them as angry,drooling, dirty babies, with no sign of decay or "zombieness". But Tharg still thought they screamed "deceased babies" so asked if I could make them look more "demony" instead. 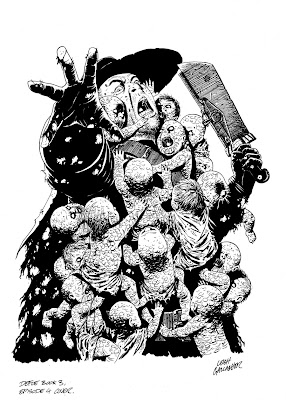 It took a while for me to think of a solution that would still make the creatures on the cover relevant to the story inside, but eventually I thought to give the babies scaled skin and sharp teeth. Also at the suggestion of my buddies John Reppion and Leah Moore, they would eventually have red glowing eyes and a more alien green blood pouring from their mouths, so basically they now looked like little monsters which is alot more acceptable. And Tharg thought so too!

Can I just add at this point in the inking I wasn't happy with Defoe's eyes and expression--he seemed a bit too scared, and I originally wanted more "angry desperation", so before I coloured it, I repositioned one of his eyes in Photoshop and messed around with his eyesbrows abit.
Also, Pat quite rightly mentioned that having the inscription of "Killing zombies since 1666" on Defoe's weapon probably wouldn't do us any favours. 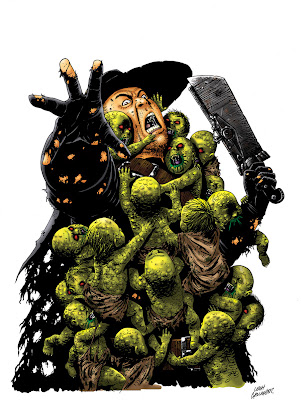 And here's the finished colour piece! We got there in the end. Personally, I'm made up with how it turned out and I'm hoping it could be a memorable cover. But of course, it's up to the readers.
Hope you like it!
L

Hi Leigh, I absolutely love the idea of Zombie Babies, do you know if 2000AD will be coming up with a collectable figure range of them? You could have frightened Zombie Baby and Camp Zombie Baby to name but two.

Also, my wife and I are unable to have children and would like to foster a Zombie baby do you know of any adoption / foster agencies that cater for such request? I believe Madonna knows of somewhere, but due to an injunction, I am unable to contact her directly.

Aw its absolutely brilliant! Its great seeing your pencils as well because your pencils have a real european feel which changes slightly (and in no way for the worse don't get me wrong) when its inked as you have a real heavy black line. Terrific!! Wish you all the best and I'm loving Defoe and can't wait to see you on more strips.. Maybe Dredd? Or Daredevil!!

Ah cheers Jamie. Nice to get comments like this sometimes as when you work alone in your room all day and night, it's hard to imagine sometimes that people actually read it!

I can honestly say that I will never draw a Daredevil strip, BUT if you want to see a drawing of Dredd I did, head to http://scotchcorner.blogspot.com/ where I'm today's guest artist! I'll put a post up about it now.

As for actually drawing a Dredd strip in the future, I'd LOVE to, but that's up to Tharg...

Hmmm...sorry Johnnie, i'm guessing that zombie baby figures would end up in the 50p bargain bin faster than the Shia Labeouf figures from Indiana Jones....

The cover rocks and getting to see the work behind it is great. Also your photo reference picture could be used as an incentive to get on with work when the lure of the internet drags artists away from their boards!

Thanks buddy! Aw man, yeah I never even thought of that for the photo! Great idea. I should make you all print it out to put on your drawing table with the inscription "Get back to work beeyatch!"

Glad you like it Ash--hopefully in the next couple of weeks I'll do another one for the graphic novel cover!

Stunning image, great cover Leigh. Really interesting to get these insights too. Keep it up , man!

It's a beauty. By which I mean, the photo ref, but the drawing's good to. (The inscription on the photo ref is "Measuring Zombies since 2001" I take it).
Great cover: love the pose, love the inks

Terrific cover, Leigh! I can't wait to get these progs in the States.

Hey, it's the world famous Hipster Dad! Thank you sir, i remember reading some of your kind words a while back on your site! Just read your latest entry--man I hope you're right about Rebellion in San Diego...

Hey Leigh, spoke to you at the walker art gallery in Liverpool on Tuesday, I have done what you said and made a blog page! I love you work you are fantastic! Anyway just a comment to say you made me think about my art lol! My drawings and painting's are some what different to yours lol!

Hey buddy! Wow...I actually inspired someone....
It was fantastic to meet you and your family mate--on my way to your blog now!