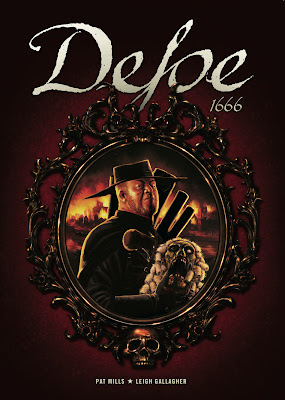 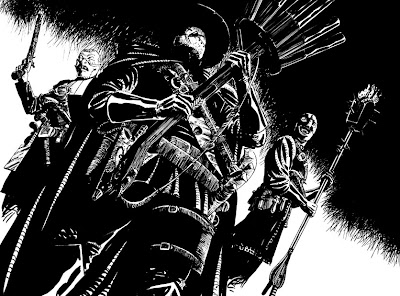 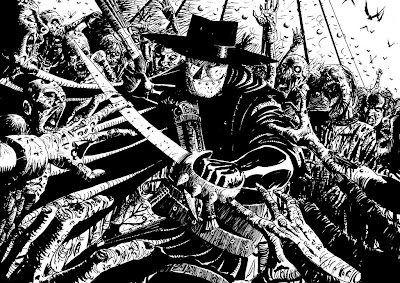 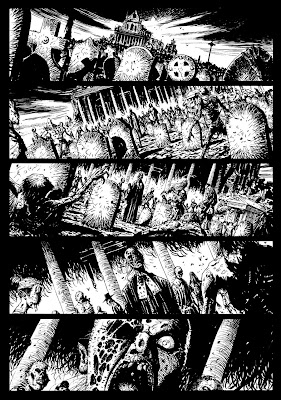 Hey there!
Ok, finally 2000AD's DEFOE 1666 graphic novel, written by Pat Mills, and illustrated by me, is hitting stores on August 15th!
It collects the first two "books" of Defoe, as well as a sketchbook section where I have alot of the original character designs, plus an afterword written by John (Watchmen, Razorjack)Higgins!
Here's the official description:

London, 1668. It is two years since the city was devastated by the Great Fire, the inferno caused by a comet passing over the capital. But from the ashes rose the undead, hungry for the flesh of the living. Protecting the populace are zombie hunters like Titus Defoe, a former soldier who now makes it his mission to purge the ghouls.

This collection also features around twenty or so panels redrawn/retouched by me, so this is the "remastered" edition if you want to call it that!
If you haven't asked for this at your local comic book store or book store, here's a few links where you can get it online (by the way, the sites don't feature the final cover as shown above): AMAZON UK , FORBIDDEN PLANET INTERNATIONAL and for the rest of the world THE BOOK DEPOSITORY where they actually ship worldwide for FREE! Bargain!!!
Above is the digitally painted cover I did for it, as well as a reminder of some of the images inside. Hope you like the cover--it's my first crack at digital painting. As soon as I'm finished drawing this final episode of the current book (Queen of the Zombies) in a week or so, I'll post up another making of feature, as well as a side by side comparison of the redrawn panels in this collection.
Spread the word guys!
Catch you soon,
L
Posted by Leigh G at 23:31

Thanks Mrs Shalvey! I don't mind that you were obviously drunk when you wrote that...I still love ya...

Drunk yes, but not drunk on alcohol....

Thanks buddy--try to make the clapping look more manly though...

Nice one Leigh. looking forward to picking this bad boy up

Sweet
Will try and pick this up once its released

Wiiiiilllllllllll.....thanks man. You buying this ensures you won't get picked on by the other kids.

Ash, thanks alot! Buy one for all your family as well--it's the gift that keeps on giving!

That's a really classy cover Leigh - consider it well and truly on my amazon wishlist!

Lee you gonna have these at the thought bubble con?
Will have to get you to sign it

Yeah, I'll deffo be there. Make sure you introduce yourself!

Hmmm, dunno matey. you wouldn't believe the crap I had to go through to get that many last year. I heard there's a Leeds store now, so we shall see...

You're clear proof that people don't just want me for my donuts. Thanks Ash.

Awesome! I'm definitely getting a copy. Love the cover mate! You rule :)

One comment though - I noticed in the official blurb that devestated should be spelled devastated. If that is just a typo when you transcribed it then no worries, but if you cut and pasted that from like a print proof, you might want to let someone know : -)

Balls...I just pasted it from the 2000AD site. Just double checked the same blurb on the advert in the latest prog and on the back of the cover's pdf, and it's fine for those, so we're good.
Thanks buddy, made up you like it!

It's on the list and I'll be taking ownership as soon as it comes out. Will also be getting you to sign it at Thought Bubble. See you there!

Cheers matey! i'll be sure to do you a better sketch than i did at the last con as well!

The digi-cover looks classy. And the panels are spectacular - especially that last 'widescreen' one.

Thanks alot Alan-- I just got back from seeing Tharg at his Nerve Centre, holding an advance copy of the book, and I'm very, very chuffed. Especially after finally getting to read what John Higgins wrote in his Afterword!

I love the cover. This year I know what I want for Christmass...

Christmas??? Y'know Santa wouldn't be offended if you got it NOW!!!