THE END IS NIGH EVENT AND MAKING OF THE COVER!!! 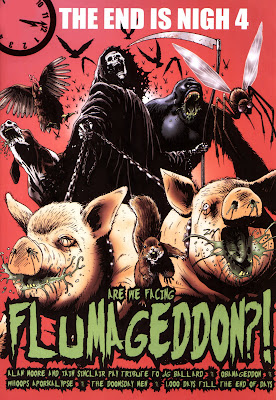 Me again!
Right, a couple of months ago I finished the cover for Michael Molcher's apocalyptic magazine, "THE END IS NIGH" issue 4.
This Sunday 1st November is the official launch at Bradford's Impressions Gallery 12.30pm till 4.30pm! Michael will be doing a talk about the end of the world at 2pm, and for the rest of the afternoon I'll be on hand, as there'll be a drawing /drinking session for anyone that wants to join in (thanks to award winning comic store OK COMICS who will also have lots of apocalypse themed comics for you to browse through or buy, including Defoe!). Should be LOADS of fun! I'm so excited, a little bit of wee just came out....
Anyway, you can find all the details for this FREE event here! All the cool kids will be there!
Impressions Gallery
Centenary Square
Bradford, BD1 1SD.
Tel: 01274 734 635
Right, below is the making of the cover I did for THE END IS NIGH issue 4! 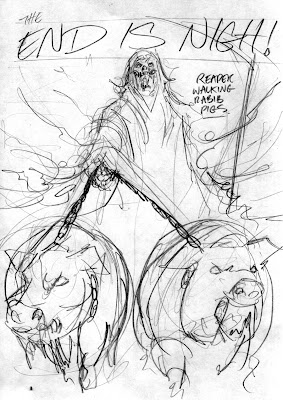 Michael left it up to me as to what I should depict on the cover as long as it was exciting and apocalyptic. What with Swine Flu scaring the crap out of everyone these days, I came up with these two rough ideas with "The Grim Reaper and pigs"...
He went with my first rough drawing, but with the great idea to add other animals who have, or could, become possible infection threats in the future. 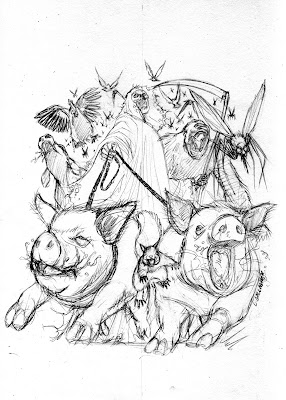 Pencils.....It took a while to get a composition that would favour all the animals we wanted to put in. Also, it was a pain in the ass finding decent reference for the animals I used, as I didn't just want to bluff how, for instance, pigs will look running towards you.... 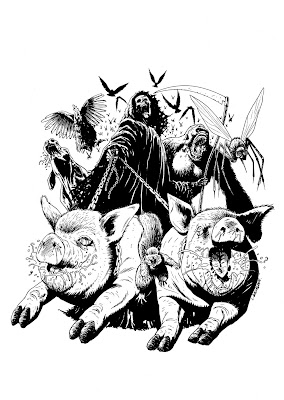 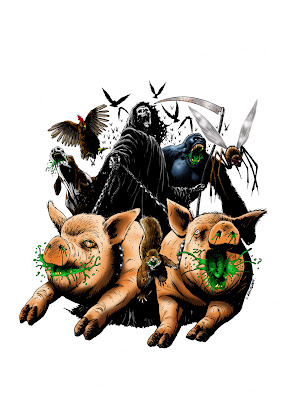 I submitted two colour versions to Molcher. This one above I thought was simple and striking with the white background, though he decided to go with the red background below.... 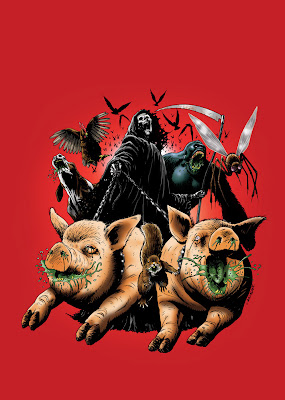 Here's the final image! It probably does work better with the red background, and he wisely advised me to tone down the green sliver from their mouths...
Hope you like it anyway. Pretty happy with how it turned out, and it was nice to work on a piece that's a complete departure from my usual stuff! Once I get the file for the lettered version, I'll update this post.
L
Posted by Leigh G at 21:14

Death, Monkeys, Pigs... it's got everything I love

Awwwww, look at the mucus coming out of the pig's eye! That is just nasty!

You've outdone yourself my friend, and I think is is probably the best of your colour work!

Michael is apparently sending me a pdf of EiN #, so I am going to try and post a review of it as soon as I can.

Although I have such a backlog of review copies it' not even funny. Also, I may, or may not be going to a comic convention in my home town this weekend. They told me they'd give me a free press pass, but it's still not here. Sigh...

Ah thanks buddy. It was a fun job, and how often am I gonna get a chance to draw something like this!

By the way, I know the link for the pencilled jpeg doesn't work, but I tried 3 times to get it to enlarge, then gave up...

Sweet
The Gallery is about 20 mins down the road from me.
Might have to swing by and say hi.
Are you gonna be sketching?

Yeah Ash, I should be there from 1pm. I'll be sketching , but not sure what the format of the event is, so I don't know if sketching with everyone is going to start until after the talk at 2pm.

I got a sneaky peek a while back and it blew my socks off - caught wait to see it on paper as I suspect it'll look even better!!

If you want a larger copy of the final cover then Mike has posted one with the official announcement over on the TEIN blog.

Have fun at the launch.

Cheers very much Emperor! Looking forward to finally holding it in my hands.

Yeah, I saw the lettered cover on his blog, but it's still pixelated, so he's hopefully sending me a clearer copy tonight.

Hopefully see you there anyway!
L

I'm going to be hiding in a bunker at that time, so can't make it ;)

Also I stuffed that link up somehow too, it should be this. I must admit I didn't check the quality too closely - you are the one with the artist's eye (and lovely hair!!). I possibly have a better version in a draft PDF but it sounds like The Molch has it in hand. If he keeps slacking off I can look into sorting it out for you. ;)

Thanks mate, I may be in touch if Molcher proves himself worthless...
And cheers for the compliment about my hair.
L

cool cover, leigh...kind of prefer the white background myself...but what do i know.
Stupid question i know but please humour me...Do you use Digital colouring jiggery-pokery, or the old fashioned kind?

Appreciate it Rob! Yeah, I do digital hocus pocus colouring in Photoshop. I can't remember the last time I coloured something by hand!!

Hope everyone had a good time.
In the end i couldn't make it

The reference work paid off. That is pretty much exactly how they looked last time I had pigs running toward me.

Alan, I've found that a bar of Snickers down your pants does the trick....who would have guessed?