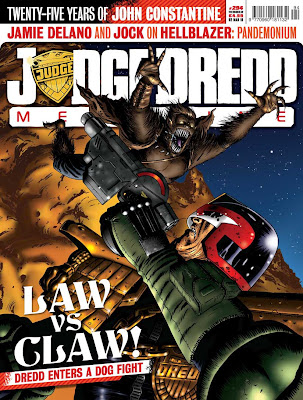 Helloooo.......Above is the cover I did for the latest JUDGE DREDD MAGAZINE 294, out in stores in the next few days, you lucky ladies!
Inside this issue is the second and final part of "Dog Soldiers" written by Robbie Morrison, drawn by myself, coloured by Abigail Ryder and lettered by Annie Parkhouse.
The Mighty Tharg asked me to come up with a cover based on the cliff hanger ending of the previous episode, with a werewolf pouncing on Dredd...have a guess which version he picked.... 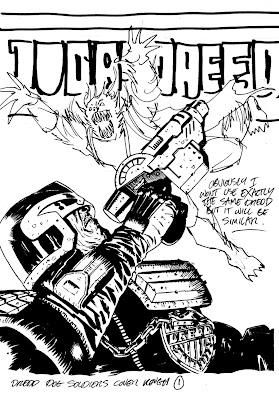 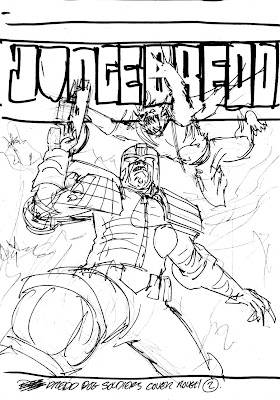 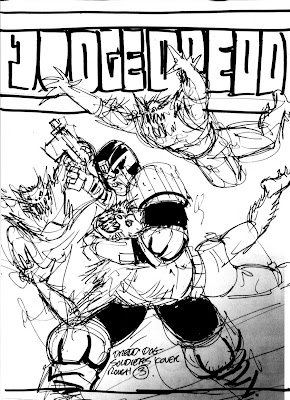 So going with my first idea, with Tharg asking me to flip the image, I went to pencils....though would you believe I actually drew this bugger out at least FIVE times! I was never happy with the Dredd/werewolf ratio, as well as deciding whether or not to show his free hand--in the end, deciding not to as I'd have to make Dredd smaller to fit it in, and I also knew that text would cover that section anyway. But here's ONE of the pencilled pages.... 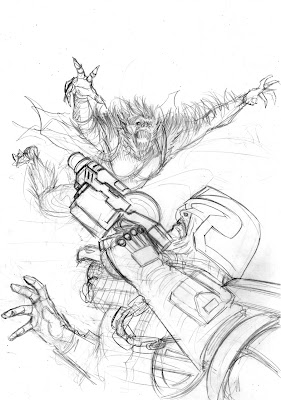 Inks...this actually took a couple goes to get right as well...it was part nerves as well, knowing it was my very first Judge Dredd cover, and not wanting to balls it up. 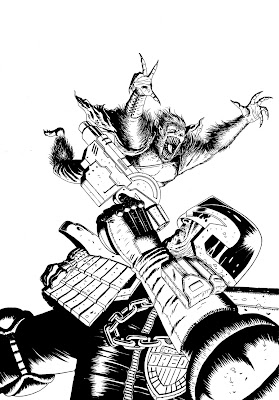 This here is the rocky background I decided to add on a separate layer so that the graphic design droids at 2000AD wouldn't have to "cut around" the werewolf that I knew would be going over some of the logo. 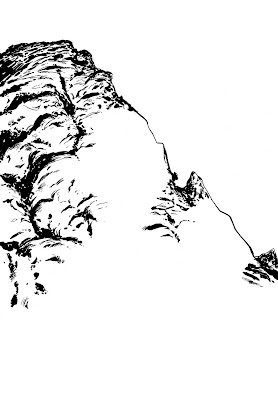 Colours next...no problems here for once! 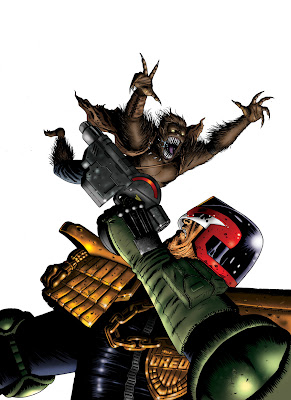 I faded out the dense blacks on the background so that the foreground characters could stand out more. 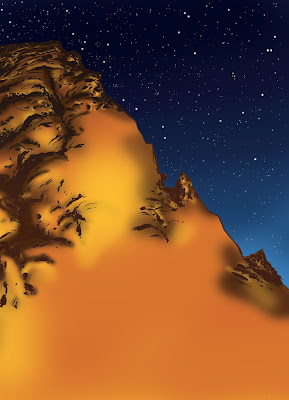 All that was left was to dim down the lights, put some Barry White on, and leave these two alone in a room for 20 minutes...eventually they made this.... 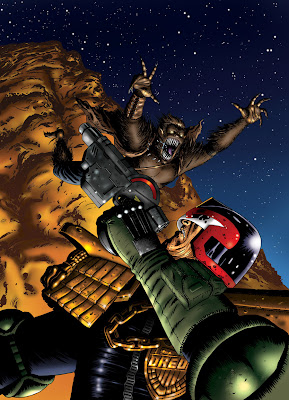 Great great cover. I really like the second thumbnail too

Great stuff man. The editorial input can be risky as sometimes editors can pick the most boring idea, but it looks like the cover looks all the better for it in this case. Ye definitely went in the right direction.

Thank you Mr and Mrs Shalvey. Believe me, I've learned the hard way NOT to submit any ideas that I wouldn't want to draw....

It's great Leigh. I really enjoyed your Dredd strip work too. Good luck with the Defoe cover!

Thanks Kev! I'll see if I've time to post another "making of page" soon.

Thanks for this - always nice to see the evolution of a piece. And if you don't want the prelims anymore...

I'm actually going to put all the Dredd pages up for sale on another site in the next couple of weeks. if you want first dibs on anything drop me an email sometime next week when I've had a chance to price them up.

That's very kind of you to say sir. Thanks Alan.

Man alive! That is by far one of your best covers yet. I say one, because it's hard to beat that Zombie baby cover :)

Did you colour this one yourself? It definitely looks a lot more vibrant than the colouring on the internal art. I think it work incredibly well!

Also, these process posts you do are just above and beyond the call of duty. You should talk to the guys that run 2000adonline.com, and see if they'd let you post one of your process posts on their front page. They need more stuff like that on the site.

Thanks matey. I don't personally don't think it's my most memorable cover, but I think it does it's job ok.

Yeah, I coloured this cover myself. It would have been a bit too much hassle for me to colour 20 pages.

When I return from the SFX Weekender I'll post up the making of the first page of this issue.

Thanks for taking the time to do these 'making of' pages, you don't know how much they're appreciated out here in Geekville!

Got my copy yesterday, great stuff, mate.
I was hoping you'd have a 'making of..'
The strips excellent too! :D

Aww, you guys.....thank you sincerely!