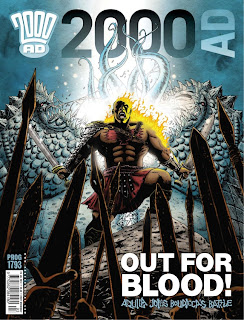 Ok, this sexy, sexy baby came out in stores yesterday! It's the second part of 2000AD'S AQUILA: BLOOD OF THE ICENI, also featuring my cover. Want to know how I made it? THEN STOP TOUCHING THAT FOR A MINUTE AND READ ON!!!!

I gave Tharg options, being in two minds about which to do myself. The first I liked because I knew it would be easy to do, but the second I knew would be worth the effort if I did it. So as you know, the boss picked the second option. 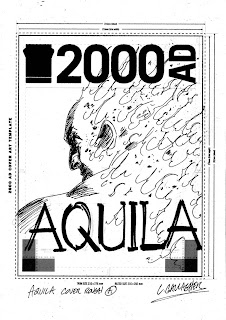 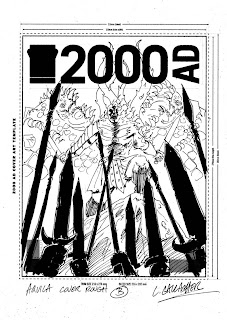 After taking manly reference photos of myself that you will not see because I'm just too damn buff for you, I did the pencils. I should add that at this point in time, I hadn't seen the script of what Aquila was wearing, so unfortunately you won't actually see him in this exact outfit in the story... 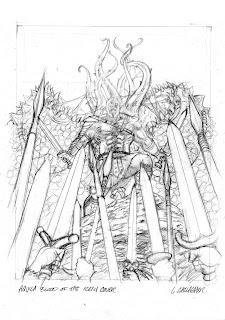 Followed by inks (you know the drill by now)... 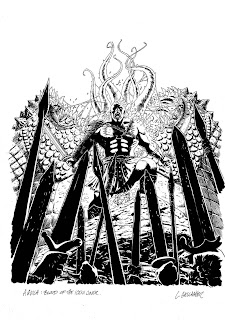 At this point I thought I'd start experimenting with my techniques, and so added an ink wash to the background to give my colour work some much needed texture... 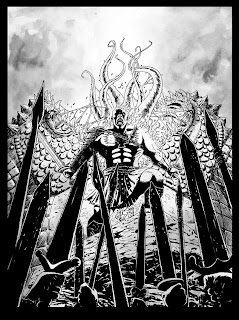 Hiding that layer for a moment, I went onto flatting the colours. Now I love the opportunity to colour my own work, but the one thing I don't love is FLATTING. It's damn tedious and time consuming. If ever I get a chance to colour my own interiors, I'll be tempted to employ my own flatter. 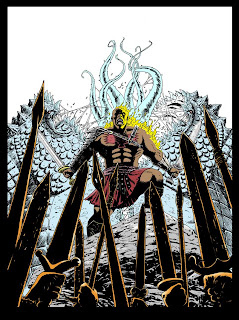 Very nearly done....this was what I thought was the finished cover...until The Mighty Tharg thought that the light appearing from between Aquila's legs looking like a fart... neeeever thought I'd hear Tharg say that.... 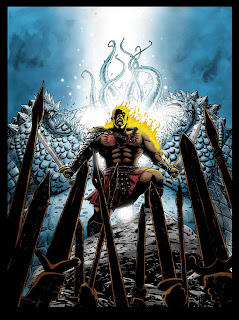 And so here is the FINAL version of the cover. I added a paper texture last minute, which also gave it a warmer shade that I quite liked. Pretty happy with this one! 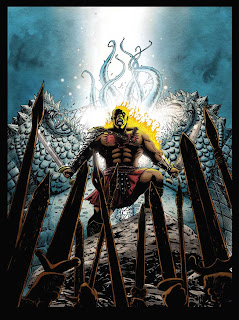 The 2000AD design bots slam the logos and headlines on, as seen at the top of this post, and you can find it in all good stores NOW!

Damn you Gallagher, now I will never unsee Aquila's guff. Thankfully it looks like it dissipated before the final cover :P

I still can't believe a green headed alien editor of an intergalactic comic pointed that out! You should try and work a fart into your next cover and see what he does.

If I didn't dislike talking about bodily functions so much, this would replace the "zombie hands look too sad" story...

Love this cover. Just finished reading Blood of the Iceni this morning and what can I say? Art is wonderful throughout, really visceral and perfectly captured the characters. The story gripped me the whole way too and can't wait for more.

Many thanks James! I'll be posting up the making of the Boudicca cover soon....