Time to get back to my usual egotesticle, I mean egoTISTICAL self, pimping my own ass....
Ok...so I've heard back from a couple of stand up retailers that the collection of DEFOE 1666 is selling well! Mike Mclean at ASYLUM BOOKS AND GAMES in Aberdeen is on his THIRD reorder! Thanks Mike!
Over the last couple of days ago, I actually printed out a batch of A3 promotional posters to help it's visibility, and mailed them out to as many stores as I could afford, seen below: 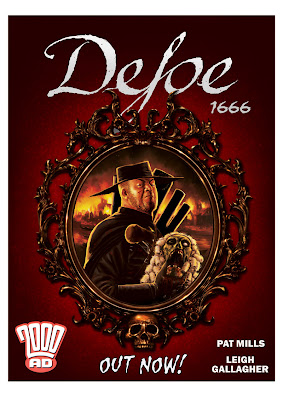 The third book of Defoe, entitled "Queen of the Zombies" has just this week concluded being serialized in 2000AD, and I'll be starting work on the forth book, "A Murder of Angels" sometime in October!
Before then, I've a few smaller jobs that I'll post up soon, including a cool cover for online magazine THE END IS NIGH, plus a horror card image for RENEGADE ARTS ENTERTAINMENT, and also a pin up for Barry Nugent's novel, FALLEN HEROES.
But the best news, is that next week I'll be starting work on my first Judge Dredd story!!! It's a two parter for the Megazine, and that's all I can say right now, but I'll post up my working drawings over the following weeks. It was all thanks to this earlier Dredd sketch that I gave to Tharg, and I can't wait to get started!
For now, here's random none spoiler panels from the final three parts of Defoe "Queen of the Zombies".
See ya,
L

Hey Leigh, the boards are back online @bzp, so I posed the thing about the TPB here: http://www.bzpower.com/forum/index.php?showtopic=308505

Ah Greggy, good man! Cheers very much for that and glad the BZP boards are back. No idea what regular Bionicle fans will think of this work though.

And thanks alot Ash!

Congrats on getting Dredd!
That uplit head shot in this post is great stuff

Many thanks Alan--just hope I don't balls it up....

And cheers, I'm happy with how that whole page turned out. Won't be too long before I'm drawing the chubby bloke again.

Hey, great news on the Dredd front!
You know, I reckon you'd do an awesome Judge Death too... so I've now got my fingers crossed he's in that script!

Really enjoyed Defoe it's really grown on me. Looking forward to seeing you tackle Dredd

Thanks very much Kevin, though sorry mate, there's absolutely no Judge Death in this story dude.

James, very glad Defoe eventually won you over sir, otherwise I would had to resort to drawing Defoe naked for an entire episode.

I know in the first year it split folk down the middle, but I hear more and more positive comments everyday now, so that's very cool.